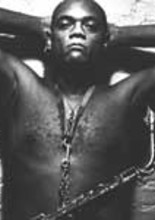 Earshot presents three of the most prominent voices in improvised music. One listen to Kahil El’Zabar’s Tri-Factor and you know that modern jazz continues to offer the spirit and risk that has captivated music lovers for decades. El’Zabar is joined in this unit by violinist Billy Bang, and multi-instrumentalist Hamiet Bluiett.

Percussionist El’Zabar is a resident in Chicago’s perpetually flourishing jazz community. Soon after graduating from the school of the Association for the Advancement of Creative Musicians (AACM) in the mid-1970s, he formed the Ethnic Heritage Ensemble with tenor saxophonist Edward Wilkerson, Jr. As more musicians were added through the years to that unit, El’Zabar developed relationships with players from the New York and St. Louis music scenes. He has since recorded and performed with a multitude of talents, like, for example, David Murray, Joseph Bowie and Pharaoh Sanders. His output on the Delmark label in recent years is impressive. The Ritual Trio, with reedist Ari Brown and bassist Malachi Favors, is a solid waypoint in the post-Coltrane continuum. With Spirits Entering (Delmark, 2001), an exceptional duo record with violinist and fellow Tri-Factorite Billy Bang, El’Zabar seeks to explore controlled, yet unconventional areas of the sound palette.

Bang is a remarkably talented musician, best known for his work in the String Trio of New York, with John Lindberg and James Emery. As a youngster, he chose to set aside his first instrument, the violin, in order to pursue drumming. But he returned to violin in his late ’20s, at a time when Leroy Jenkins and Ornette Coleman not only made the instrument cool again, but were creating an entirely new vocabulary for its use. Bang’s musical language and ideologies, like those of Bluiett and El’Zabar, owe much to organized musical/cultural communities, such as the AACM and the Black Artists Group (BAG). He is a student of a school that emphasizes the dynamics that can be pulled from the collective, while searing forward with an independant voice. Valve No. 10 , a sleeper title from the Soul Note catalog, is perhaps Bang’s most intriguing recording as a leader. The controlled agitation on the album is remarkable, and Bang — in the company of much-underrecognized saxophonist Frank Lowe — proves the violin to be a natural complement to reeds in small ensembles.

Tri-Factor’s music furthers the risk-taking tradition. With El’Zabar and Bang, the music’s bass register is piloted by a BAG alumnus, and St. Louis staple, Hamiet Bluiett. A huge force in free improvised music, Bluiett is possibly the most accomplished baritone saxophonist of the past 30 years, having performed with Sam Rivers, Oliver Lake, Arthur Blythe, and Gil Evans, among others. His sparring and harmonizing with Julius Hemphill on Coon Bid’ness (Black Lion, 1975) made the record one of the preeminent statements of its time in improvised music. A gutsy improviser at heart, Bluiett is equally potent with standards and traditional jazz. Fond of the possibilities of music without the anchor of a rhythm section, Bluiett is a founder of the accomplished World Saxophone Quartet (formed in 1976 with David Murray, Oliver Lake, and Julius Hemphill). He is a master of the most challenging registers on all of his instruments, and is a sought-after component in many ensembles for his practical approach to the saxophone.

On Tri-Factor’s The Power (CIMP, 1999) Bluiett sheathes his preferred baritone sax in favor of the deeper tones of both bass and contrabass saxophones. The record offers a lexicon of forms, all propelled by El’Zabar’s unique rhythmic style and penchant for African beats. Bang’s extensive violin technique gives the music much of its color, while Bluiett maintains a catchy expressiveness that is both daring and true to jazz lineage. The trio was somewhat discouraged during the making of this record, as a result of setbacks and technicalities in the studio and engineering process. Yet it is difficult to imagine any label but CIMP tackling the capture of this music. The label is renowned — and a recipient of varied criticisms — for its recording philosophies and practices. Their recordings are virtually devoid of filtering or other editorial tweaks during mastering, which can produce a range of results, depending on the observer. In the case of The Power , the raw, sterile acoustics provided in the CIMP sound arena serve the music well. The eccentric instrumentation works on all levels — Bluiett’s sax sound is absolutely alive, and Bang’s violin is more gentle than bright, especially when providing melodic support.

But the glue to the trio is undoubtedly the crafty grooves of El’Zabar. Each musician contributes original material to the music, which overflows with captivating melodies, framed by inventive rhythmic patterns that evolve from the fringes of the trio’s ideas.

In all, Kahil El’Zabar’s Tri-Factor creates a healthy mix of swinging melody and rousing free improvisation. Their April 4 performance at the Tractor Tavern in Ballard is certain to incite feet to tap and jaws to drop.

Be there, and bathe in it.