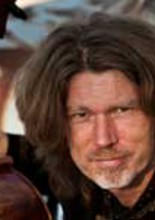 Born in Milan in 1965, Stefano Battaglia started playing the piano at age seven and was awarded a diploma with distinction in 1984. He has devoted himself to intense and ultimately award-winning studies of Bach and the Fitzwilliam Virginal Book (a 16th-century collection of keyboard pieces) as well as contemporary movements and jazz.
Since 1984 Battaglia has appeared in a wide range of musical constellations, playing about a thousand concerts throughout the world, and has been awarded numerous national and international music prizes. He has been a lecturer at the summer seminar of Siena Jazz since 1988 and, beginning in 1996, has also directed Siena’s Laboratorio Permanente di Ricerca Musicale.
His preferred fields of study are musical research, composition, improvisation and experimentation, which have resulted in an enormously wide range of recordings. Among those deserving particular mention are his settings of Rainer Maria Rilke’s cycle of sonnets Sonette an Orpheus; a series for Swiss Radio’s DRS 2 network, which has produced five albums; a series of solo performances in Italian churches (released by the Symphonia label on six CDs as Esalogia dell’Abside); and his consistent collaboration since 2004 with the renowned German label ECM.
Stefano Battaglia: “We must not lose our innocence as artists. Melodies need space around them. When I make music, I have to protect the light that encompasses the melody. The music I write is not supposed to sound highly developed. It could just as easily have been written a thousand years ago and performed by simple musicians on simple instruments. I use melodies, rhythms and dances to find an almost primitive approach to music.”
BBC Music Magazine writes:
“Battaglia approaches improvising as if it were an exercise in classical form and line: these are spacious, unhurried episodes, [with] dissonance and rhythmical daring seamlessly integrated into abstract yet curiously songful shapes.”

Born in Judenburg, Austria, in 1965, guitarist Wolfgang Muthspiel now lives in Vienna. He is considered one of the most important guitarists of our time. His work as band leader and co-leader has been documented on 30 CDs, for which he composed most of the pieces. A classically trained musician, he takes the same direct approach to the acoustic guitar as he does to the world of improvisation and jazz.
At the urging of his father, a Mozart fan, Muthspiel began taking violin lessons at age six. At 14 he switched to the guitar and began making his own music together with his brother Christian. An interest in improvisation finally led him to jazz. In 1986 he received a scholarship to travel to Boston. There he studied at Berklee College of Music under Mick Goodrick, who introduced him to the secrets of complex musical harmony. Beginning in 1988 he toured for two years with the Gary Burton Band, making an outstanding reputation for himself. In the mid-1990s he moved to the jazz capital of New York City, where he lived and worked until 2002.

After 16 years in the “land of opportunity” he returned home, establishing a base in Vienna but continuing to travel across Europe as a sought-after virtuoso, creative co-leader and sideman. In 2000 he founded the label material records, which issues not only his own recordings but also those of other artists. Following a tour with his then-new group 4tet and a duo project with drummer Brian Blade (2008), Muthspiel has been devoting more attention to his trio called MGT (Muthspiel, Slava Grigoryan, Ralph Towner), which is performing for the first time in Europe following tours to Australia in March 2008 and October/November 2009.
Muthspiel teaches guitar at the Hochschule für Musik in Basel. Current projects include the duo Friendly Travelers (with Brian Blade), From a Dream (MGT), Drumfree Trio (with Scott Colley and Mark Turner) and series of ever-changing solo performances with various guitars and loops.
In addition to numerous less-important awards, Wolfgang Muthspiel received the Hans Koller Prize as Musician of the Year 1997 and was named European Jazz Musician of the Year in 2003. Musicians Magazine has named him one of the “World’s Top Ten Jazz Guitarists”.

is a unique musician. A virtuoso of three instruments, a composer of orchestral music, and an improviser fluent in all musical languages, he moves boundlessly across the entire musical spectrum.
As a cellist, performing in jazz, world music or rock, he makes the cello sound as if it always belonged there.
Be it in a raga duo with Grammy-winning Indian guitarist Vishwa Mohan Bhatt, with a jazz big band, or in front of a symphony orchestra, the voice of his cello is instantly recognizable.
Svante Henryson grew up in Umeå in northern Sweden, playing the local jazz clubs as a fourteen-year-old bass player.
As a double bassist, still in his teens and halfway through music college, he became a member of the Oslo Philharmonic Orchestra. Soon after making his debut as a soloist with the orchestra he became its Principal Double Bassist. Svante was also the Principal Bass of the Norwegian Chamber Orchestra led by Iona Brown.
Following that was a three-year stint as a bass guitarist with rock guitar legend Yngwie Malmsteen. Stevie Wonder and Steve Gadd are also on the list of previous encounters of his Fender bass.
As a composer, his list of works includes two concertos for cello and one for the electric bass guitar, as well as symphonic, choral, chamber, and jazz music. Noted performers of his chamber works include Anne-Sofie vonOtter, Elvis Costello, Martin Fröst and Roland Pöntinen.
As an improviser, Svante belongs to the top layer of modern Scandinavian jazz musicians, working with Arve Henriksen, Ketil Bjørnstad, Terje Rypdal and Palle Mikkelborg to name a few.
Svante Henryson currently lives in Stockholm, Sweden.
Nowadays he spends parts of the year in Northern Norway, where he has been appointed Artist-in-Residence by the Norwegian Government.

Alegre Corrêa was born on 9 June 1960 in Passo Fundo in the Brazilian state of Rio Grande do Sul. At the age of 13 he “moved” to his real home – music – where he works as a guitarist, singer, percussionist and composer. At its core his home is clearly Brazilian, and yet it remains open in every direction. Thus it does not matter whether Corrêa happens to be in his state capital, Pôrto Alegre, where his musical career began, or in Vienna, which is a capital not only of classical music but of jazz as well.
Appearances at numerous venues, including the Montreux Jazz Festival (Switzerland), Florianópolis in Jazz (Brazil) and the WOMAD Festival in Wiesen (Austria) have added to his reputation as a musician who forges new paths within his genre: paths in new directions but also paths that take him back to his roots.
The specialist press is still searching for a term to describe Corrêa’s individual style. Names such  as “fusion” and “crossover” make no more sense, he believes, than attempts to draw a clear line between head and heart. His music is always both sensual and intelligent, complex and light-hearted, groovy and elegant. “Brazilian music has always been a mixture”, says Corrêa. The pieces that fit together to create his musical jigsaw puzzle are certainly a form of fusion, bringing together the traditions of Río Grande do Sul, a place of widely diverse musical elements. Here tropical fleetness of foot meets Argentinean melancholy, as in the relaxed tempi of the chamamé, chacarera and milonga and, of course, in the samba, bossa nova and MPB (Música Popular Brasileira). Corrêa was also influenced by a number of important musical models – Antonio Carlos Jobim, Toninho Horta and Hermeto Pascoal – along with a large dose of jazz, pop and funk, which are also part of his personal style.
While Corrêa was touring Brazil in September 2003, the governor of Rio Grande do Sul awarded him the Gold Medal for Cultural Achievement. At almost exactly the same time the Hans Koller Prize in Austria recognized him as Musician of the Year 2003. Corrêa first collaborated with Joe Zawinul in the autumn of 2004, becoming a fixed member of The Zawinul Syndicate the following year.