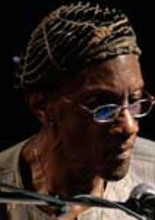 The Facts: The legendary keyboardist played both with Parliament-Funkadelic and the Talking Heads as well as with Bill Laswell, Mos Def, and (when he was 10) the Washington Symphony Orchestra. Here Worrell is joined by the Rollins Band’s hard driving rhythm section of bassist Melvin Gibbs and drummer Sim Cain and the guitarist André Lassalle.

The Sound: In the pocket funk meets blistering hard rock with searing improvised soloing -- but not always. Check out the third track “Another Day” (at the 15:00 minute mark) a more down tempo R&B-inflected track with Bernie’s flanged keyboard traversing the astral plane.