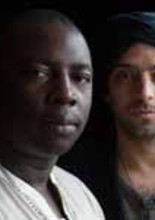 This artist has achieved great success by looking beyond intercultural differences and celebrating the value of diversity, changing the face of Israeli popular music and offering a message of love and tolerance that resonated strongly in a region of the world where headlines are too often dominated by conflict.

Idan Raichel performs in his band with first class musicians with different musical backgrounds giving a very soulful world experience to the audiences. Idan Raichel is a superstar and gains also internationally big respect around the globe. For example: How many musicians count the privilege of performing once in their lifes in front of the US President Obama? …Well, Idan Raichel is only in his mid-thirties and has done it already twice! And Last December 2010 Idan Raichel was chosen together with India Arie to perform live at the Peace Nobel Price Ceremony – an event followed all around the globe by millions of people and for sure one of the biggest honors for any artist.  With an enchanting blend of African, Latin American, Caribbean and Middle Eastern sounds, they have already taken Israel by storm selling more than 200.000 CDs! This unique project has collected worldwide very good critics for their albums but as well as for their live shows which they have presented in legendary venues as i.e. the Opera House Sidney, Kodak Theater Los Angeles, Queen Elizabeth Hall London, Teatro degli Arcimboldi Milano, Wiener Konzerthaus, EXPOZaragoza, Estival Jazz Lugano, Piazza del Campidoglio, etc

Vieux Farka Touré (born 1981), known as "the Hendrix of the Sahara", is a singer and guitarist born in Niafunke, Mali.  He is the son of legendary African blues musician Ali Farka Toure.  Vieux has proven through his engaging live shows staged all over the world that he is the heir to Ali's talent while still distinguishing himself from his famous bluesman father by transcending the limitations of the world music genre. International acclaim is still pouring in from his second full-length release in May 2009 by Six Degrees Records, Fondo—one of iTunes best World Music albums of 2009, and a staple on critics' year-end pick lists as chosen by the Wall Street Journal, The New York Times, The Village Voice and the BBC among many others.

In June 2010 the Vieux Farka Touré (VFT) Live album was released, affirming that Vieux has become a legend in his own right, emerging at a crucial point in history, just as the Western world is finally beginning to take notice of West African acts like Amadou & Miriam and Oumou Sangaré. Not only does the VFT Live album capture the excitement of Vieux's much-anticipated 2010 FIFA World Cup performance in front of a billion audience over the world, but it also confirms that tens of thousands of music fans all around the world already know that Vieux's live show is championship-caliber.

The Story Behind The Touré-Raichel Collective