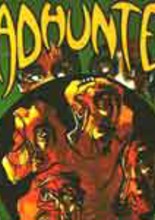 The band assembled for Herbie Hancock's 1973 album Head Hunters. Reflecting the new direction for Hancock, this was a new line up, with only wind-player Bennie Maupin in common with his previous sextet. Bassist Paul Jackson was really the only other member who maintained a continuous presence in the line up. For this first album they were joined by percussionist Bill Summers and drummer Harvey Mason. This album would become, for a time, the biggest selling jazz album ever (although it has since been overtaken by Miles Davis' Kind of Blue).

The band continued to work with Herbie Hancock throughout the seventies, although the precise line-up varied from album to album. For the follow up to their eponymous debut, 1974's Thrust, Mike Clark took over drumming duties; both Mason and Clark contribued drums to the third Headhunters album, 1975's Man-Child, which featured guest appearances from Stevie Wonder on harmonica and Wayne Shorter on soprano sax, amongst its greatly expanded line-up. (The release notes credit 18 musicians, in contrast to the simple quintet of their debut.)

1975 also saw their first album without Hancock, Survival of the Fittest, featuring the hit "God Made Me Funky".The Song is Sampled In The Fugees song "Ready or Not",and has been covered by Jamiroquai as a live track. Secrets (1976) saw James Levi installed as drummer, Kenneth Nash on percussion, and the addition of Ray Parker and Wah Wah Watson on guitar, alongside regulars Hancock, Maupin and Jackson. This was the Headhunters line-up who performed two tracks at the V.S.O.P. concert on June 29, 1976 as part of the Newport Jazz Festival. The concert was released as an album in 1977.
1978's Sunlight saw guest appearances from renowned bassist Jaco Pastorius of Weather Report and drummer Tony Williams, and the same year saw their second album without Hancock, Straight from the Gate.

As the 1970s turned to the 1980s, Herbie Hancock drifted away from the band as he moved into his electro-oriented phase, and they ceased operation as a visible unit. The band were later reunited, with Hancock, for the 1998 album Return of the Headhunters.
Clark, Jackson and Summers have since continued recording and performing as The Headhunters, based in New Orleans, with Victor Atkins and Jerry Z filling in for Hancock. They released an album, Evolution Revolution, for Basin Street Records in 2003, and backed up the saxophonist Rebecca Barry on her 2005 album Rebecca Barry and the Headhunters.